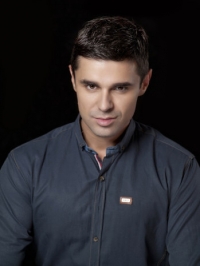 After graduating from high school in DSU. Vlado Tasevski,

Miki, enrolls at FDA, in the acting department, class of prof. Kiril Risteski and ass. Zoja Buzalkovska and graduated in 2006. with the play: Nothing without Trifolio, based on a text by Rusomir Bogdanovski.

From 2006 to 2012 he worked on several theater plays at MNT as well as the Drama Theater, such as: Jonadab, Macedonian Roulette, Marat Sade, Summer Night Dream.

2011 is part of the film: The Balkans Are Not Dead, directed by Aleksandar Popovski

Until 2012, he worked on several TV series, TV commercials, radio commercials, as well as over-synchronization of the Macedonian language on TV feature and animated series on many local televisions and productions.

Since April 4, 2012, the Theater for Children and Youth has been in full-time employment as an Actor

From that moment it is part of almost all theatrical performances that are performed in the home theater. After the first play he stars in, Flower Street (directed by Natasha Poplavska) many others follow: The Ugly Duckling, Pippi Longstocking, The Wizard of Oz, Endless Dreams, A Commercial Fairytale, Oliver Twist, Mowgli, Peter Pan, A Tale about Emperor Naj, Cinderella, Giga Mega fairy tale, Puss in the Boots, Animal Farm, Our Class, A Dormant Mind gives birth to Monsters.